A woman’s biological clock is ticking waiting for ‚The Eggman‘ to pass by in her kitchen. This is her chance to get pregnant but therefore she needs to seduce ‚The Eggman‘. ‚The Eggman‘ seems to have more interest in his chicken. Slowly she drives him to the back of his kitchen where things het out of hand. 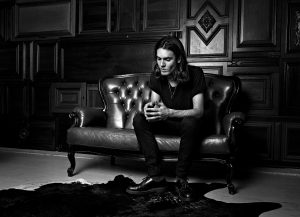 Marc received in his hometown Nijmegen his Bachelor in Communications, where he wrote his papers for record label PIAS and the film distributor Cinéart. To develop his passion for film he moved to Berlin on invitation of the award winning documentary maker Viola Stephan. In Berlin he completed internships for Tonmeister Adrian Baumeister at ‚The Post Republic‘ and ‚Berlinale Panorama‘, and had many different roles on film sets before he founded his own film production company ‚Holy Birds‘. Under this name he wrote, directed and produced his first short film HOLY BIRD starring Rolf Kanies (“Der Untergang”). After 4 long, cold days and nights in the woods, the shooting of the film was complete. While HOLY BIRD was still in post production, he’d already completed his 16mm second short film THE EGGMAN starring Lars Rudolph (“Werckmeister Harmonies”, “Lola Rennt”) and Anna Böttcher (“About: Kate”). His films were recognized by film festivals and by the Filmacademy of Amsterdam where he was selected to study directing. With a very own style, highly regarded directors such as Charlie Chaplin, Andrej Tarkovsky, Ingmar Bergman, Akira Kurosawa, David Lynch, Bela Tarr, Ingmar Bergman & Alejandro Jodorowsky can clearly be seen as influences on his work. Currently he is working on his first queer film project THE ONE and on a trilogy with two fellow director students.